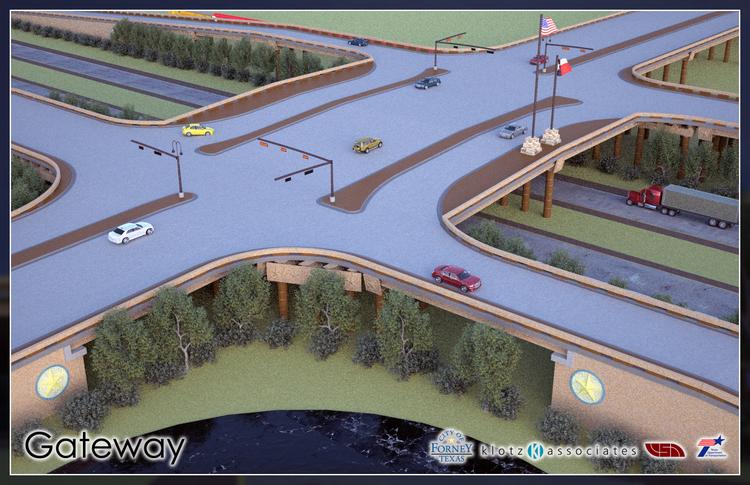 Construction is set to begin in May on a new bridge in Forney that will open more than 2,000 acres of undeveloped land for commercial and residential construction.

W. Herbert Hunt, the City of Forney and the Regional Transportation Council are contributing to a public-private partnership to build the Gateway Bridge over U.S. Highway 80 and the Union Pacific railroad.

The bridge is part of a $26 million, 2.2-mile Gateway Boulevard project that will serve as an eastern loop for Kaufman County and will create an intersection with U.S. Highway 80 ripe for retail and multi-use development, backers say.

“Basically this will end up being the gateway to East Texas,” said Hunt, son of the late oil tycoon H.L. Hunt and principal of Dallas-based Petro-Hunt LLC. It’s an area “that is very underdeveloped, and it really is going to create the heart of Forney when you’re through with it. This is a development that will go on for some period of years.”

Hunt, who owns about 1,450 acres along the new road, is funding more than $12 million of the road and bridge construction.

Some 662 acres of his land is slated for a mixed-use development called Meadow Ridge Farm LP, which will include 5,000 upscale apartments along with retail stores and possibly a hotel and entertainment center. Hunt’s remaining 790 acres are targeted for other residential development, with some commercial and retail, he said.

The bridge will be Forney’s first above-grade crossing over the Union Pacific line, Mayor Darren Rozell said. The city contributed $3 million to the construction project.

“It’s meeting a transportation need and a safety need, but since we’re not going through an area that’s already developed, it also has the potential for a huge economic benefit, too,” he said. “It will be years before we recognize the full impact of this project.”

Construction began last year on the northern section of Gateway Boulevard. The four-lane divided thoroughfare will connect to Farm Road 548 on the north and to Farm Road 1641 near Interstate Highway 20 to the south.

“So many people pass through Forney and never stop,” Rozell said. “We’re going to change that. I want people to have a reason to stop and spend some time in Forney.”

Alan Bain, vice president of real estate development for Dallas-based Petro-Hunt LLC, said the bridge is scheduled to be completed in July 2013. Meadow Ridge Farm plans to break ground on some apartment units by this fall, he said.

The new bridge and road will more than double the city’s commercial development potential, Buttram said.

“I think it will completely change Forney,” she said.

Forney will host a groundbreaking for the bridge at 10 a.m. Thursday, May 10.